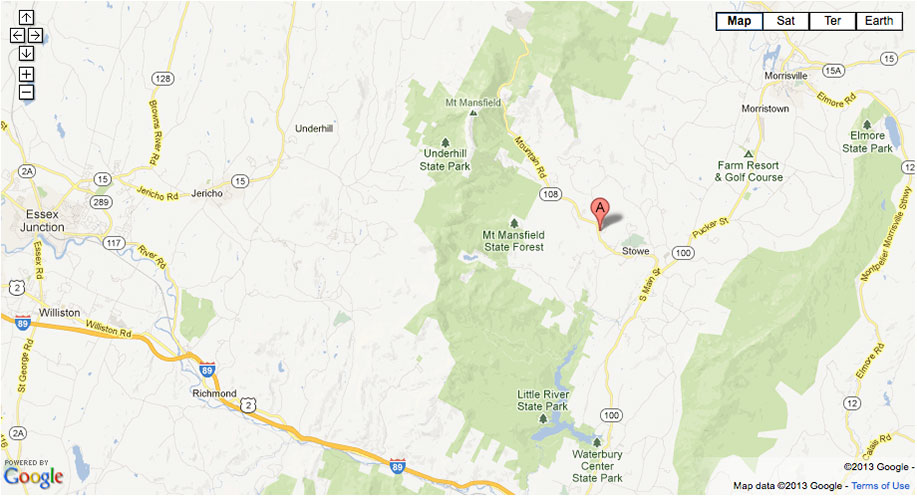 Getting to Stowe offers 90% highway or interstate driving – more than any other major ski resort in the East. Major roads will bring you all the way to Waterbury, which is only 10 minutes from Stowe Village. If you wish to fly in, Burlington International Airport (served by American/American Eagle, Continental Express, Delta Connection, Jet Blue Airways, Northwest Airlink, United/United Express, US Airways/US Airways Express) is only 40 minutes away and train travelers arrive in Waterbury.

Take Exit 10 "Waterbury/Stowe" (if traveling through NH, be aware there is also an Exit 10 in NH on I-89, but you don't want that), then follow Route 100 North for 11 miles. You will come to a 3-way stop in the village of Stowe. Turn left there onto Route 108 (also known as the Mountain Road ) Proceed 3 miles, and turn right on Houston Farm Road (you will also see our lighted sign there at the intersection.) Turn left into the first driveway (a wedge shot); look for a small lighted sign.

Turn right onto Williston Road (heading West). Go 1½ miles to the junction with I-89. Take I-89 South, toward Montpelier. Then follow the "from Interstate 89" directions.

Pick up I-95 North and follow it to New Haven, CT. Then pick up I-91 North, which will take you into Vermont. In White River Junction, pick up I-89 North. Follow directions from Interstate 89.

Take I-93 North to Concord, NH. Then pick up I-89 North. This will take you into Vermont. Follow "From I 89" directions.

Pick up I-95 North. Follow the signs to I-93 North outside of Boston. Follow "From Boston" directions.

Option 1: Take I-87 North. Get off I-87 at exit 20, Queensbury, NY. Go left at the light. There is another stop light a couple blocks up, where you take a RIGHT on Rte 149. Follow Rte. 149 to Fort Ann, where you take a left on Rte. 4. In Whitehall, take a right to stay on Rte. 4. Follow this into Vermont. Just after crossing the state line, watch for exit 2, where you pick up Rte. 22A North. In Vergennes, pick up Rte. 7 North. You will enter the South Burlington area. Watch for a Denny's restaurant on the right. Just after the Denny's take a right-hand exit to I-189 (a short connector to I-89). You will go about 1 mile, then pick up I-89 South (toward Montpelier). Now follow the "from I-89" directions. Option 2: If, in inclement weather, you would prefer a longer but all interstate route, pick up I-90 East (toll) to Springfield, MA. Follow the signs for I-91 North. This will bring you into Vermont. In White River Junction, take I-89 North. Follow the "From I-89" directions.

Take I-287 North in New Jersey to I-87 North (toll) in New York. Continue on I-87 North to Albany, then follow "From Albany" directions.

Take I-90 East and continue toward Albany, NY. Follow "From Albany" directions.

Take Interstate 10 East to Interstate 35 South. In Iverville pick up Route 133 South to Phillipsburg. In Phillipsburg pick up interstate 89 South. Follow "From I-89" directions.

Follow Route 4 East to I-89 North OR for a more scenic option, follow Route 100 North to the village of Stowe. Then follow the remainder of "From I-89" directions.

Pick the best East/West route based on your location (most likely Route 2) and follow it through Maine, and through most of New Hampshire to I-93 North. Follow I-93 North into Vermont to I-91. Then take I-91 North to the exit for Route 2 West to Danville. Follow Rte. 2 West to Rte.15 West and on to Morrisville. In Morrisville, take Route 100 South to Stowe. At the 3-way stop in Stowe village, turn right on Route 108. Follow it exactly 3 miles, and then turn right on Houston Farm Road. It's the first driveway on the left.