Archive for the ‘Recipes’ Category

Parfaits for breakfast? It sounds like it must be sweet. It is, but it’s full of fruit, tastes wonderfully, and it’s a fun, fresh beginning to breakfast.

This recipe combines two different recipes: one for a Zabaglione (from the Bauli Recipe Book); another for curried fruit (from the Much Ado About Food – A Guthrie Theater Cookbook).

While the fruit is cooking, make the Zabaglione. (Note the completed Curried Fruit in the background) 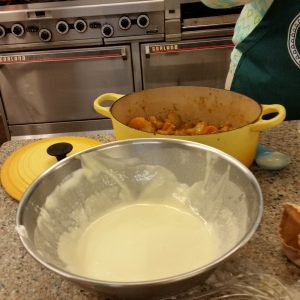 Mixing:
• In a large mixing bowl whisk the egg yolks and sugar until fluffy and pale yellow in color.
• Add the Prosecco and whisk until well blended.
• Transfer the mixture to the top of a double boiler, place over simmering warer and whisk constantly until the mixture is quite thick and heavily coats a spoon.
• Don’t let the mixture come to a boil or the eggs will curdle.
• Immediately transfer to a large mixing bowl and whisk in the vanilla.
• Refrigerate the zabaglione until completely cool.
• Fold in the whipped cream and chill until serving.

• To assemble the parfaits, you will need 6 tall glasses. (We prefer the ones you see above)
• Spoon about 2 heaping tablespoons of the zabaglione into the bottom of each glass.
• Top with a thick layer of the Panettone cubes, using about ¼ to 1/3 cup
• Add two heaping tablespoons of the curried fruit
• Layer more zabaglione, Pannettone and fruit. 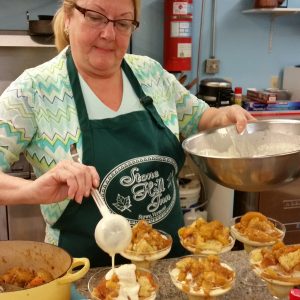 • Finish with one last pour of the zabaglione.
• If you have time (we didn’t) cover with plastic wrap and refrigerate for a couple of hour before serving.
• Also, if you like, top the chilled parfaits with a dollop of whipped cream and a sprinkling of almonds and fresh mint.

Normally, we, at Stone Hill Inn, have a separate fruit course, fresh baked goods, yogurt and home-made granola as a starter for breakfast. We used this dish as a substitute for all of them!
The finished product…we didn’t bother with the whipped cream – it’s already plenty tasty!! (six servings): 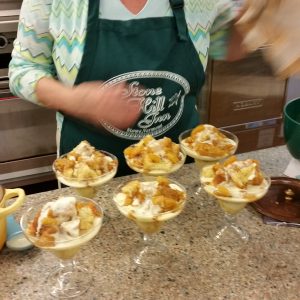 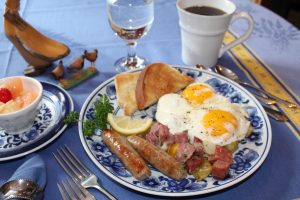 The strongest flavor in this distinctively tasty breakfast results from a vegetable that is related to variety of species of thistle (scolymus – commonly referred to as the golden thistle).  Now, right away, doesn’t that sound tasty?  (ugh!)  Yes, but studies have shown this vegetable to aid digestion, hepatic and gall bladder function, raise the ratio of HDL to LDL and strong in antioxidants.  (No it is not cod liver oil!)  It was also used as a food among the ancient Greeks and Romans in the 1500’s.  Native to the Mediterranean area, its initial processing includes removing all but 0.2–0.4” of the stem along with about a quarter of scales so as to delete its residual thorns.  (Fortunately when you purchase them in the store, this has already been done.)   With such a history, no wonder they have such a unique taste.  What is it?  An artichoke (Cynara scolymus)!   We love them and they have become a delicious addition to Stone Hill Inn Breakfasts!

Combine milk, black pepper, salt and eggs in a large bowl, stirring with a whisk.  Add the yummy Parmigiano-Reggiano cheese and bread; toss gently to combine.    Stir in artichoke mixture.  While you let this stand for 20 minutes, preheat oven to 375 degrees.

Our breakfast service usually lasts for about two hours, and guests often arrive depending upon the activities in Stowe they have planned for the day.  Thus everyone is rarely available when the strata initially comes out of the oven.  So we remove the strata from the oven to avoid its drying out, and we warm a piece when requested by the guest.  We plate the strata with a small mixture of fresh lettuce and cherry tomatoes flavored with a light oil dressing – adding toast and meat accompaniment, as requested.

How we pitch it

Our breakfast this morning includes a wonderful combination of flavors – an artichoke/goat cheese strata.  We form a base of sourdough bread in a baking dish and add a mixture of artichoke hearts, goat cheese, and some additional herbs so as to enhance its naturally Mediterranean flavor.  We bake that in the oven until browned and serve warm with along with a small salad.

Perhaps you have noted among the recent reviews for the Stone Hill Inn, the mention of one breakfast dish that seems to claim particular favor.  While many guests have generally praised Linda’s breakfast creations, this devilishly tasty entre is often mentioned by name.  Such distinction requires, of course, exceptional taste, but one wonders if the name itself plays a role, for how could you say Baked Crème Brulee French Toast without causing a sly smile to adorn the face?   Now a favorite at our Stowe bed and breakfast, especially among returning guests who quickly intercept Linda to request this bewitching  meal  soon after they arrive!  As said in A Real American Breakfast Cookbook:  “A true luxury, this is worth every last calorie.” END_OF_DOCUMENT_TOKEN_TO_BE_REPLACED